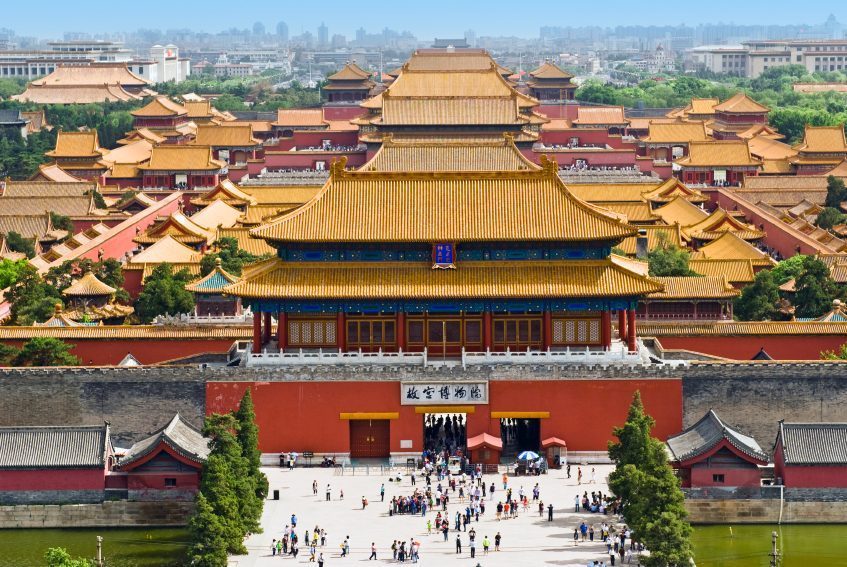 The Forbidden City is called “Gu Gong” which is the meaning is  “The Palace From The Past” and surrounded protected by a 10 meter high wall.  Beijing called this city as Forbidden City because of only the emperor and his servant were allowed to enter it without permission.

The Forbidden City was the imperial palace for 24 emperors during the Ming (1368-1644) and Qing (1644-1911) dynasties. It is located in the Center of Beijing, Chinaand covers an area of about 72 hectares with a total floor space of approximately 150,000 square meters and consists of 90 palaces and courtyards, 980 buildings and 8,704 rooms.

The construction of the grand palace started in the fourth year of Emperor Yongle of the Ming Dynasty (1406), and ended in 1420.

In 1961, The Forbidden City was listed as an important historical monument Under Chinese central goverment special preservation.  In 1987 it was nominated as World Cultural Heritage by UNESCO. The palace museum is a treasure house of Chinese cultural and historical relics and it is recognized as one of the most important palaces in the world beside Palace of Versailles in France, Buckingham Palace in UK, the White house in the US and the Kremlin in Russia.

In  Ancient times, the emperor was said to be a son of Heaven and therefore Heaven’s supreme power was bestowed upon him. The emperors’ residence on earth was built as a replica of the Purple Palace where God was thought to live in Heaven. To represents the supreme power of the emperor given from God and the place where he lived being the center of the world, all the gates palace and other structures of The Forbidden City were arranged about the north-south central axis of old Beijing.

The Forbidden City was  painted with splendid decoration on these royal architectural wonders, the grand and deluxes halls, magnificent  treasures  and nowadays which is the tourist throughout Beijing and abroad can visit this place.

How to get there?

If you departure from Jakarta,  you may fly to Beijing Capital with Air Asia X

Or you may get the promo every day fly to Beijing

Make your adventure to The Forbidden City

Tips on How to Get the Most Out of Ramadan Period

List of Countries with Most Infected Patient from Coronavirus

Airpaz provides an easy solution for anyone to get the best ticket's price by combining all available promotions from more than 100 airlines and 250.000++ routes around the world.

The way to Visit Legoland Malaysia from Kuala Lumpur

You Have To Know! The Facts of Petronas twin tower in Kuala Lumpur