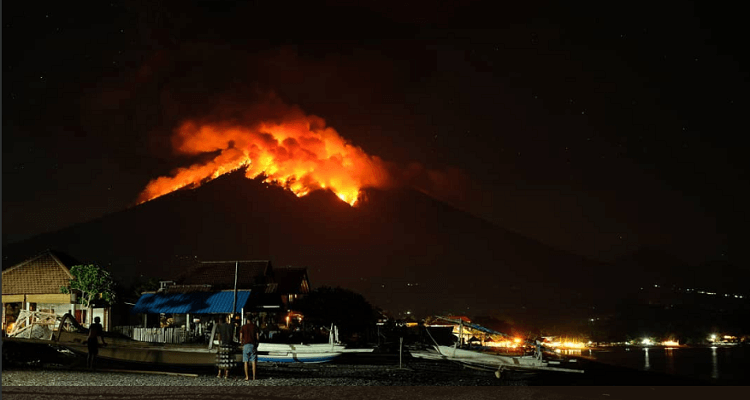 Mount Agung erupted again on Tuesday (3/7/2018) morning. The largest mountain on the island of Bali has erupted twice. The Center for Volcanology and Geological Hazard Mitigation (PVMBG) informs the first eruption around 4 am with a height of ash columns as high as about 2,000 meters above the peak.

While the second eruption occurred around half past ten in the morning with the same ash column about 2,000 m above the peak. Although the eruption continues for the last time, Gunung Agung is still at level III or alert status.

Therefore, people around Mount Agung, climbers, visitors, and tourists are absent and any activity is in the danger zone, ie, over a radius of 4 km from the summit of Mount Agung crater.

The hazard prediction zone is dynamic and continuously evaluated and subject to change over time. Residents living in and around the Sungai Sungai Agung must also use potentials such as lava flows that can occur especially during the wet season and if eruption materials are still open in the peak areas.

The incident caused two airports in East Java that Blimbingsari Airport at Banyuwangi Airport and Notohadinegoro had to be closed down. The closure was caused by volcanic ash from Mount Agung Yang spread to the area of Banyuwangi and Jember. Airport operations will reopen after conditions are safe for flights.

In connection with the eruption of Mount Agung in Bali today, there has been no new travel attraction from various countries. One by one the country has issued Travel Suggestions for its citizens who are or will be brought to Indonesia. Return trips make the perpetrators more careful during the holidays to Indonesia, especially Bali along with the eruption of Mount Agung at the end of 27-30 June 2018 yesterday.

With the eruption Monday night and Tuesday morning, there has not been a new travel appeal that is connected with Mount Agung at this time. Some questions are given for travel to Indonesia and currently refer to travel information issued in late June 2018, countries such as the United Kingdom, the United States, Canada, Singapore, Hong Kong, Australia and New Zealand.

Of the 8 countries that issued travel apps, none of them uses their citizens to travel to Indonesia. All just ask travellers to be careful, avoid risk, always watch the news and always communicate.

If you want a holiday, now you can travel easily through online like Airpaz. Airpaz provides 50,000 routes to the world. Do you want to get cheap tickets? Do not hesitate to use Airpaz pricing and you can get the special promo from Airpaz. Happy travelling.

The Fatal Effect of Coronavirus on Tourism is predicted until 2021

Global Passport Ranking : The Most (And Least) Powerful Passports in The World as of 2020

Meaning of Sakura Flowers in Japanese Cultures and Japanese People

Be Careful When Traveling to Japan for the Typhoon Lan