The Celebration of the Loi Krathong Festival

If you have been living in Thailand or you have travelled to the country at a certain time, you probably have heard about the Loi Krathong festival. It is a traditional festival that is celebrated in Thailand as well as other places with Thai heritage, such as Laos. What’s so special about this festival, anyway? And what meaning does it have?

The festival lasts for around 3 days. The lantern festival takes place on the first day while the second day is dedicated for the full moon day. The last day is usually dedicated to the Loy (or Loi) Krathong parade. Since the festival isn’t exactly a public or official holiday, most of the activities usually happen in the evening or after it is dark.

The word Loi Krathong itself is divided into Loi and Krathong. Loi is floating in Thai while Krathong means tiny banana tree trunk raft that is decorated with candles, flowers, incense, and also folded banana leaves. While it is a full moon, people would release these Krathongs on the river, letting them float.

See: Things to Do in Sirinat National Park Phuket Thailand

How this festival originated is still confusing. Some people believe that it is originated in India, still related to the Hindu. If you compare the Loi Krathong festival to Deepavali event, both of them have their share of similarities. The release of Krathong is a symbol of gratitude – just like Thanksgiving. Moreover, there were H.M. King Rama IV writings back in 1863 about Thai Buddhists adapting the Brahmanical festival to honour Siddhartha Gautama, the original Buddha.

The candles aren’t only honouring the original Buddha, but they also symbolize the release of bitter feelings, anger, and any negative feelings. By letting all of those negative energies go, they can start a new life. Some people may put their nails or hair, symbolizing the letting go of any bad personality or bad part. 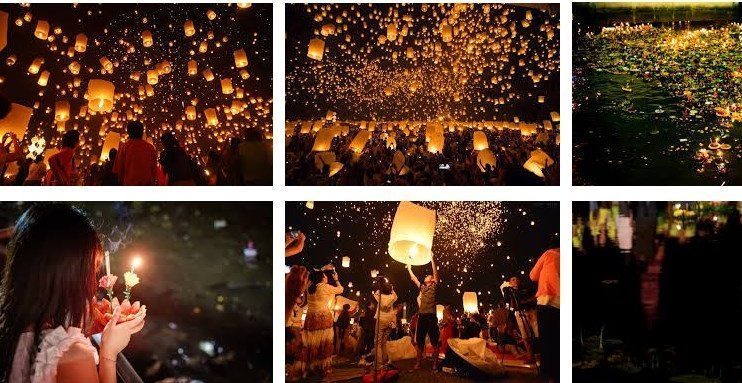 Unfortunately, because of the danger of the sky traffic, the release of lanterns is strictly organized and allowed. Right now, the sky lanterns can only be performed on the second or third day, and it should be done an hour after midnight. The places for the release are also strictly managed – only on the area between the Iron Bridge and Nakornping Bridge. Most of the events are free, so feel free to come here and see the lanterns.

Tips for Enjoying the Events

In the event that you are travelling to Thailand for this festival, it is a good idea to prepare yourself for activities at night. The street is quite busy at night. The parks and the riverside will be crowded with people. Stroll around and roam freely. You will see the interesting activities and you get to interact with the local people.

Besides getting prepared for the evening activities, it would be wise to book a hotel near the river or with the direct view of the river. Since people will release the Krathongs on any body of water or river, you should expect an amazing view of the floating candles at night. If you are coming to the northern side of Thailand, especially in Chiang Mai, then you can also see the Yi Peng festival.

So, are you interested in visiting Thailand? You can plan your next holiday there. Visit Airpaz to arrange your flight. Happy traveling

Shopping in Chiang Mai? Here Are Some Best Places to Go