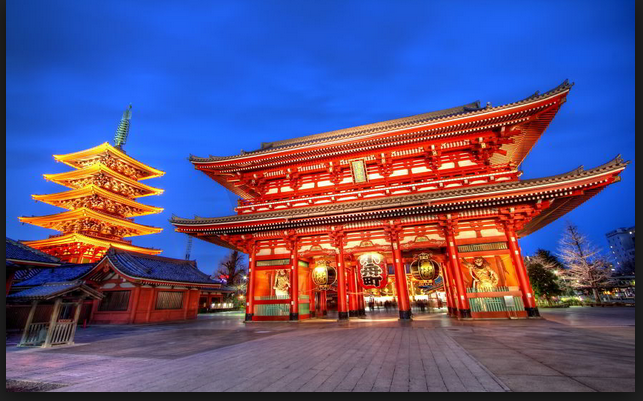 The oldest Buddhist temple in Tokyo named Sensoji Temple  and also well  known with Asakusa Temple.  Sensoji Temple are few steps from Asakusa station, was visited almost by 30 million tourist  from throughout Japan and abroad every year.

Sensoji Temple is the focus of Tokyo’s largest and most popular matsuri (Shinto Festival) and it take place over 3-4 days in late spring and sees the surrounding streets closed to trafic from dawn untul late evening.

But there are the story tells behind Sensoji Temple. What is it?
Once upon a time there are two brothers fished a statue of Kannon, (the godness mercy) out of the Sumida River. And every time they put back the statue to the river it always returned to them. That’s why  Sensoji was built nearby for the godness of Kannon and it happened in the year 628. The temple was completed in 645 and it make the temple was the oldest temple in Tokyo, Japan.

Sensoji Temple is the epicenter for development of Edo Culture and still remain today. Many seasonal event are held including the Hozuki (Chinese Lantern Plant) market and Hagoita (wooden paddle) market. The huge lanterns hung at Kaminarimon (Thunder) Gate are very famous throughout Japan.

See: 15 Tips For a Great Traveling Experience in Japan

Kaminari-mon contains two protective deities  in the left sides named Raijin the God of thunder and Fujin in the right side God of wind. Within the precincts stand a stately five story pagoda and the main hall devoted to Kannon Bosatsu.

Over 200 meters, you will found Nakamise which is the shopping street leading from the Thunder Gate to the Sensoji Temple itself. It’s line with souvenirs shops ranging from T-shirt, Kimono, Buddhist scrolls, traditional sweets, cell phone trinkets , etc and all these shops themselves are part of living tradition of selling to pilgrims who walked to Sensoji. The surrounding areas has many traditional shops and eating places that feature traditional dishes such as hand made noodles, sushi,tempura, etc.

How to Get There?

You can go fly to Tokyo Narita Japan by the Airlines such as; Air Asia, Scoot, etc

Asakusa is served by the Ginza  Subway Line , Asakusa Subway Line, Tsukuba Express, and Tobu Railways . It can also be accessed by the Tokyo Water Bus.

Airpaz provides an easy solution for anyone to get the best ticket's price by combining all available promotions from more than 50 airlines and 100.000++ routes around the world.

Best Things To Do And See When Visiting Osaka